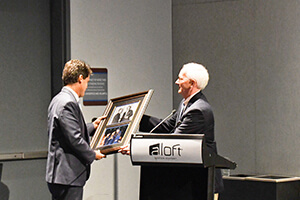 The annual membership meeting of the National Catholic College Admission Association (National CCAA), held in Boston on September 14, 2017, provided the occasion for a meaningful gift presentation. University of Notre Dame Director of Admissions and current National CCAA President Bob Mundy presented a gift on behalf of the Association and the University to the meeting’s keynote speaker Mark Shriver.

Shriver is president of the Save the Children Action Network and has a special connection to Notre Dame. He is the son of Robert Sargent Shriver and Eunice Kennedy Shriver, both of whom received the University’s prestigious Laetare Medal. The Medal, which bears the Latin inscription, “Magna est veritas et praevalebit” (“Truth is mighty, and it shall prevail”), was established at Notre Dame in 1883. It has been awarded annually at Notre Dame to a Catholic “whose genius has ennobled the arts and sciences, illustrated the ideals of the Church and enriched the heritage of humanity.”

Robert Sargent Shriver was awarded the Laetare Medal in 1968 by Notre Dame’s then-president Rev. Theodore M. Hesburgh, C.S.C. He was the first director of the United States Peace Corps. and later, as director of the United States Office of Economic Opportunity, he was prominent in the Johnson administration’s “War on Poverty.” He served as Ambassador to France from 1968 to 1970 and two years later became George McGovern’s second running mate on the Democratic presidential ticket.

Founder and chair of Special Olympics International, Eunice Kennedy Shriver chaired the International Special Olympics Games at Notre Dame during the summer of 1987. As director of her family’s foundation, she supported several efforts to improve the manner in which mentally handicapped citizens are treated in their societies. Eunice was awarded the Laetare Medal in 1988, presented by University President Rev. Edward Malloy, C.S.C. Eunice’s brother, President John F. Kennedy, received the Laetare Medal in 1961. 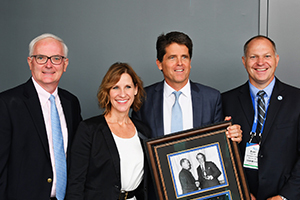 In celebration of his family’s close connection with the University and acknowledgment of his own major achievements, admissions director Bob Mundy presented Mark Shriver with framed photographs of his mother and father receiving the Laetare Medal.

“Given the Shriver family’s meaningful relationship with Notre Dame, this seemed a perfect ‘thank you’ to Mark for joining our membership meeting,” says Mundy. “It gave us the opportunity to honor the work of his mother and father, as well as Mark’s career in advocacy and social justice.”

Shriver received his B.A. from The College of the Holy Cross in 1986 and a Master’s in Public Administration from Harvard University in 1993. He was a member of the Maryland House of Delegates from 1994 to 2002. In 1988, he founded the innovative Choice Program, which serves delinquent and at-risk youth. He joined Save the Children in 2003, serving as Senior Vice President for U.S. Programs until 2013. Now, as President, he leads an effort to mobilize Americans to end preventable maternal, newborn, and child deaths globally and to ensure that every child in the U.S. has access to high-quality early childhood education. He is also Senior Vice President of U.S. Programs & Advocacy at Save the Children.

Shriver delivered the keynote address at the National CCAA meeting, which was titled “Pope Francis’s Message of Faith, Love, Humility and Mercy: Does It Really Matter?” His latest book, Pilgrimage: My Search for the Real Pope Francis, was published late last year.