The freshman class of 2017 has shaped up to be one of the most diverse and academically richest classes in Notre Dame’s history. 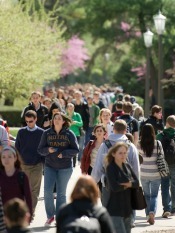 The class of 2017 also broke another record with 53% of the admitted students deciding to enroll at Notre Dame. This figure ranks among the top eight in the nation among highly selective national research universities for yield rate

Academically, 55% of the incoming freshmen were in the top 1% of the nation in either high school performance and/or on national testing and had exceptional records of service, leadership, and involvement.

Notre Dame uses a holistic admissions process where other attributes are also valued—less than 45% of applicants ranked in the top 1% for class performance or national test scores gained admission.

This class will also be one of the most diverse classes in Notre Dame’s history with 26% U.S. students of color and 5% international. Alumni children comprise 24% of the class — double the 12% average of other top 15 private universities.

Regional Diversity of the Freshman Class

The incoming class will travel an average distance of 850 miles to begin their freshman year.