My task is easy. Turn on the recorder, set it on the table and cue Don Bishop ’77 by posing occasional questions. He talks; I eat. As I finish my salad, I notice that Don’s sandwich is still untouched. It is past 1 in the afternoon. I have known Don since he was a young Notre Dame admissions counselor in the late 1970s, but I still feel bad he hasn’t taken a bite.

Since 2010 — after stints at Creighton, Ohio Wesleyan, Embry-Riddle and Cornell — Don Bishop has been Notre Dame’s associate vice president for undergraduate enrollment. That means he directs both Undergraduate Admissions and Student Financial Services. It could be the third toughest job on campus — after president and head football coach. Deciding who gets in and who doesn’t attracts a passionate band of critics, gripers and second-guessers. Bishop and his staff know quite well their decisions break hearts, collapse dreams and vault young people into life-altering directions. 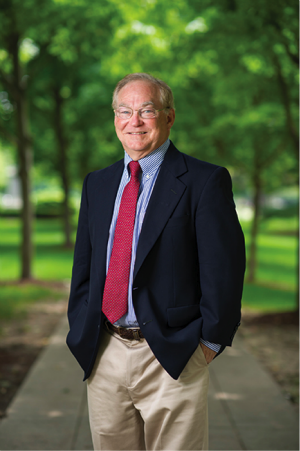 In a few days the Class of 2018 will descend upon campus. It is yet another stunningly impressive group of students — “a first-year class,” says Bishop, “we would not trade for that of any other university in the United States.” He adds, “The class that just graduated last spring, about a third of them would not have been admitted this year because of the increased quality of the pool.”

The class began with 17,901 applicants, a list that was painstakingly winnowed to the 3,785 admitted. Fifty-three percent of these ultimately chose Notre Dame (a yield rate placing Notre Dame among America’s top 10 private national research universities), for a class of 2,000 — although that head count may fluctuate slightly in the days immediately ahead.

Such talking points and data flow easily from the administrator trained in economics. Fifty-two percent of the class is male; 30 percent are U.S. students of color or international students. His office, he says, has increased efforts to reach out to low-income, first-generation students — 9 percent are the first in their families to attend college. Four of five students are Catholic. Sixty-one aspirants got in the door from the wait list. If national testing had played a more central role in the selection process, he says, the average SAT scores for this class could have been 50 to 60 points higher.

This year Notre Dame had over 1,000 more applicants with profiles placing them in the top 1 percent in the nation than four years ago. And yet about 60 percent of the applicants who ranked in the top 1 percent in the nation based on high school class performance or national testing did not gain admission. Other students, he says, showed greater academic or intellectual curiosity, more creativity, stronger leadership, a deeper commitment to service and “a more sincere belief in the value system of Notre Dame.”

The character of Notre Dame’s undergraduate population is the driving theme of many conversations I’ve had with the person most responsible for the composition of this select group. “We want kids who embrace our mission,” Bishop says. “And if a kid doesn’t ‘get’ Notre Dame, then we don’t mind losing that kid to another school.”

Bishop uses the term “matrix” when discussing the makeup of each first-year class and points to an array of stakeholders — faculty, deans, alumni, trustees, University leadership — with vested interest in the selection process and its outcome. There also are “different cohorts who enjoy added consideration” — the sons and daughters of faculty, staff and benefactors, the nieces and nephews of Holy Cross priests, athletes and the children of alumni.

“Fortunately,” says Bishop, “our alumni produce pretty bright kids. The academic profile of that group is quite good.” The admit rate for these applicants is about 45 percent — as opposed to an admit rate of 19 to 20 percent for everybody else. This fulfills a University commitment made some years back to maintain a legacy presence of 20 to 25 percent of the student body, a percentage, he says, about twice that of other highly selective institutions, including the Ivies, Duke, Stanford, Northwestern and Vanderbilt.

That means, he continues, “there are about 1,000 kids walking this campus today who are alumni kids who, if we did not have this commitment to the alumni, would not be here — about 250 per class.”

While he acknowledges the importance of the selection process, Bishop’s tenure has placed more emphasis on recruitment, on expanding Notre Dame’s reach and identifying high school students receptive to the Notre Dame story. “What about the kid who has not been exposed to Notre Dame but who is a Notre Dame [type] kid?” he asks, noting that the University has made good headway when competing for talent against other elite institutions. “But what we don’t want to do is make headway with kids who don’t care about Notre Dame. And that’s a promise we make to our alumni and to all shareholders who believe in Notre Dame. But we also need to be fair to those who just discovered Notre Dame and who are responding and becoming great Notre Dame kids.”

Still, he says, Notre Dame “takes a hit” for maintaining its legacy presence among those closely watching numbers, categories and selectivity in higher education. “We’re confident in what we want to become rather than how others perceive us,” he says. And what Notre Dame wants to become, Bishop contends, is uniquely itself — a place for highly accomplished and intellectually adventurous students with a strong desire for leadership, service and moral sympathies.

“We want risk-takers,” Bishop explains. “We want kids with ambition . . . the intellectually curious students who actually act on that curiosity and have developed a richer ability to think.”

His office, he says, evaluates numerical scores, high school performance, rank in class, and the quality of the high school and how students from that school have performed at Notre Dame. But they also spend a great deal of time scrutinizing “personal attributes” and what may be called “emotional intelligence” or “emotional quotient” — EQ. These would include, he says, “risk-taking, entrepreneurship, resilience, ambition and just the word ‘grit,’ and determination.”

He points to a report he worked on 30 years ago at Notre Dame that concluded, “We value a student’s desire to learn and think as much as, if not more than, just their sheer ability to do it.” And he recalls a student at the time who had scored perfectly on the SAT and who explained to the young counselor that the test had not been very challenging because it was simply a matter of choosing the right answer. “I don’t understand,” Bishop remembers the student explaining, “why you guys at all these selective colleges care so much about the SAT. All we’re doing is giving you the little answers. You should be more interested in what questions we have started to form.”

Bishop adds, “I think that the essence of the ideal Notre Dame student is not only somebody who has proven they are a good learner who can answer the simple questions, but we want them to come up with better questions.”

Bishop cites his experience in a corporate culture: “I was much more interested in the questions applicants asked than in the answers they’d give,” he says. “I wanted somebody I’d promote three or four times, not just fill a job. The same is true at Notre Dame. We want to admit students who will be leaders in 10, 20, 30 or 40 years — not just good students at Notre Dame.”

These intellectual capacities and appetites must be matched by something else. “We also want students who care about people,” he explains. “Do you want a college degree so you can be more powerful, so people can serve you? Or do you want that degree so you can be more powerful in serving others?” So he talks about “thoughtfulness, manners, kindness, a sense that you’re here to help others, a sense of purpose toward others. We look at that very strongly. . . . Today if that student doesn’t have a lot of the personality attributes that we expect from our mission, they’re not getting in.”

With his sandwich finally poised for a bite, he says, “We don’t intend to change Notre Dame. A lot of alumni and even nonalumni, fans and friends of Notre Dame believe in our belief system and values. There is this concern that by becoming more selective we will become less Notre Dame. Actually, ironically, the opposite is far more likely to happen and has been happening. And that is, as we’re more selective, we can be more on mission.”

As with any admissions officer, Bishop can talk process, cite figures, discuss financial aid and the high cost of a college education, the impact of social networking and the many challenges facing higher ed. He can also explain the cap the University recently imposed upon the number of students enrolling in the Mendoza College of Business. It was done, he says, to preserve the quality of the school.

Bishop attributes the growth in recent years — about 27 percent of Notre Dame’s undergrads are business majors — to Mendoza’s perennial No. 1 ranking and “the country disproportionately reacting to the economic troubles of 2007-08.” Business was perceived as a safer route to security even though the corporate world, he says, encourages broad educational experiences. The growth in majors — as well as keeping 1,000 class seats open to nonbusiness majors — has taxed faculty, something not remedied easily given tenure considerations across colleges.

Admission to Notre Dame, however, does not ride on an applicant’s acceptance into Mendoza. Those declaring an interest in business will receive a letter from the University notifying those admitted whether or not they have been pre-approved as a business major. Those who do not make the cut can still enroll at Notre Dame and pursue other options, including trying again later. “We’ll ease into this,” says Bishop, “and stay near 27 percent but not be rigid about a quota.”

Where Bishop may stray from the script followed by his counterparts comes when he talks long about the preference for wisdom over knowledge, the concept of happiness and the value of a Notre Dame education. “Notre Dame wants each student to get to know who they are as a person,” he says, “and the development of your own self-understanding is at the core of it all. When you believe in God, you believe God wants everybody to love themselves and then love others.

“I think one of the core values at Notre Dame is that we want you to be the happiest person you can be in life, because that means you are closer to God and God is closer to you. You can be any religion and believe that. The trade-up in coming here is that we’re going to move you from a higher intellect to higher wisdom, and that’ll make you happier, a more impactful person in your community.”