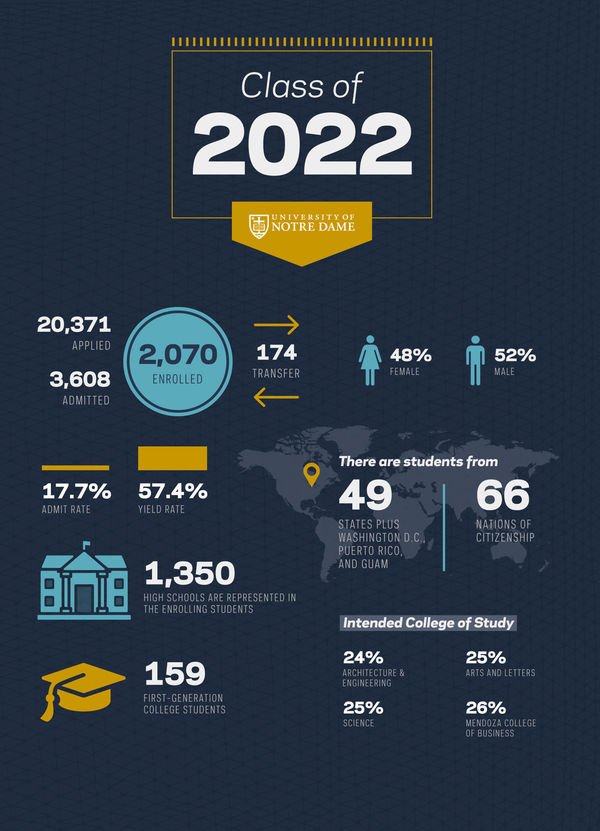 Both intellectually and globally diverse, the class of 2,070 first-year students — including more than 600 international students or U.S. students of color and nearly 160 first-generation students — began the fall semester this week.

More than 20,000 students applied to the University this year and more than 3,600 were admitted. Of those students who were admitted, nearly 60 percent enrolled for the fall semester, the highest “yield rate” for any class since 2002.

This continues a trend that started in 2010, and that — fueled by improved recruitment, financial aid, campus development, the rising reputation of Notre Dame faculty and students and the University’s commitment to social and personal development — has allowed the University to maintain class size each of the past eight years while admitting fewer and fewer students.

Demographically, 48 percent of this year’s class are women and 52 percent are men. Fourteen percent are international students or students of dual citizenship, representing 66 nations; 15 percent are first-generation students, PELL recipients or low-income students (family income of less than 60,000 per year); 80 percent are Catholic; and 22 percent are children of Notre Dame alumni.

Members of the incoming class were active outside of the classroom as well. Nearly 90 percent engaged in community service; 48 percent participated in music, drama, art or dance performances or exhibits; 76 percent played a varsity sport; 40 percent led a major student organization; 45 percent engaged in research; 51 percent held a job; 50 percent were involved in campus ministry; and 30 percent were involved in mock trial, debate or Model U.N.

“The academic profile has set a new record for measured high school achievements,” said Don Bishop, associate vice president of undergraduate enrollment. “However, what is most inspiring is the evidence provided by our new students with respect to their intellectual curiosity, creativity, energy levels toward both learning and service to others, entrepreneurial talents and desire to join our close-knit campus community and work on their own sense of self-formation.”

“This year Notre Dame is investing a record $148 million dollars in need-based aid for undergraduate students, continuing our increased efforts to add to the socio-economic diversity of its class,” Bishop said. “Over the past few years, Notre Dame has doubled its rate of investment in need-based scholarships over its increase in costs. Among the top 20 most selective national research private universities, Notre Dame ranks in the top 10 for the percentage of students receiving need-based aid.”

By state, Illinois accounts for the most incoming students (216), followed by California (159), Indiana (151), New York (145) and New Jersey (116). The only state without representation is Wyoming. New York ranks first among cities/regions with 237 students, followed by Chicago with 209 and Southern California with 116. Sixty-two students hail from the South Bend area.

In addition to the 2,070 first-year students, the University welcomed 174 new transfer students to campus this year, including 66 Gateway Transfers from Holy Cross College and 50 Engineering 3-2 or 4-1 transfers. Overall, nearly 900 students applied to transfer to the University this year and nearly 200 were admitted, resulting in a transfer yield rate of 87 percent.

This year’s class is the first born in the new millennium. The attacks of Sept. 11, 2001, occurred when they were infants, and the U.S. has been at war nearly all of their lives. They experienced the effects of the 2008 financial crisis through their parents, and they have never been without Google, which was founded in 1998. They have always stored information in the cloud or on flash drives.